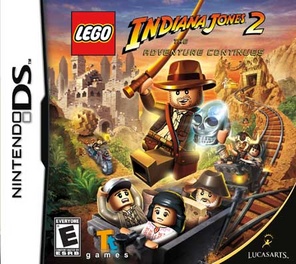 SKU 023272339616
$16.00
In stock
1
Product Details
LEGO Indiana Jones 2: The Adventure Continues combines the fun and creative construction of LEGO bricks with the wits, daring and non-stop action of one of cinema’s most beloved adventure heroes. With a unique, tongue-in-cheek take on all the Indiana Jones films including for the first time ever Indiana Jones and the Kingdom of the Crystal Skull LEGO Indiana Jones 2 follows Dr. Jones’ escapades from the jungles of South America to the Peruvian Ruins and beyond. Fans can experience the most authentic LEGO experience yet by designing and building their own levels brick by brick, and by fusing their levels with the ones in the game to create a custom experience. In LEGO Indiana Jones 2, everyone can build, battle and brawl their way through their favorite cinematic moments or create their own. Features For the first time ever in a LEGO game, Build Your Own Adventure Mode allows you to create your own levels and environments and share them with your friends. For the ultimate and most authentic LEGO experience, you can create your own levels and combine them with the existing ones in the game. Play all new Kingdom of the Crystal Skull characters such as Mutt Williams on his motorcycle and use special abilities, including Oxley’s Crystal Skull Power. Innovative re-tellings of the classic movies (Indiana Jones and the Raiders of the Lost Ark, Indiana Jones and the Temple of Doom, Indiana Jones and the Last Crusade and Indiana Jones and the Kingdom of the Crystal Skull) with all new objectives and brand new levels. For example, this time you can play through the exciting vehicle chase in Shanghai with Short Round. Beat each level in Story mode and return in Free Play for a completely new adventure. Indy has all new animations, such as grabbing an enemy with his whip then throwing him over his shoulder. Jump into all new vehicles to help Indy get through all the new levels including planes, boats and mine carts but watch out for the quicksand! Use Indy's newly enhanced whip to interact with Lego objects and help unlock iconic puzzles and battle with enemies. Use a variety of weapons from the environment to fight enemies (e.g., chairs, guns, swords, bottles). Collect artifacts through the game to unlock more than 60 playable characters, including villains and supporting characters (Marion Ravenwood, Mutt Williams, Short Round, Rene Belloq, Willie Scott, Marcus Brody, Dr. Henry Jones Sr. and Irina Spalko). Character swapping and free-play abilities Two-player drop-in, drop-out cooperative gameplay encourages parents to share the legacy of Indiana Jones with their children in a fun and humorous way.
Save this product for later