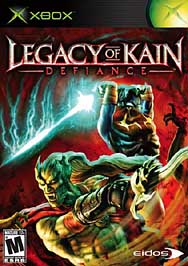 SKU 788687200127
$10.00
In stock
1
Product Details
The next chapter in the epic Legacy of Kain series is a cutting edge action adventure game featuring more action than ever before. Take control of two powerful and highly evolved vampires, Kain, an all powerful demigod, and Raziel, a demonic angel of death. Each equipped with a legendary sword, Kain and Raziel must battle through a world loaded with conflict and intrigue as they attempt to unravel their destinies and defeat the dark forces that seek to condemn their world to eternal damnation.
Save this product for later