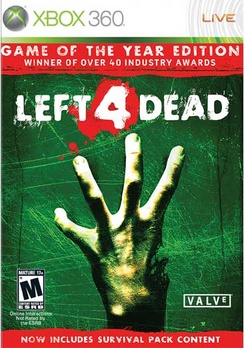 SKU 014633098761
$18.00
In stock
1
Product Details
Left 4 Dead was 2008’s Multiplayer Game of the Year, and the year’s best-selling new game property for the PC and Xbox 360, Left 4 Dead (L4D). Left 4 Dead: Game Of The Year Edition is a new L4D title that offers all the content of the original, plus all the content coming in the “L4D Survival Pack.” It’s called Game of the Year because of L4D’s high review scores, Multiplayer Game of the Year Awards, and the includes on-the-box recommendations to buy the product from leading magazines, newspapers, and web sites. About the Game Left 4 Dead is a survival action game from Valve that blends the social entertainment experience of multiplayer games such as Counter-Strike and Team Fortress with the dramatic, narrative experience made popular in single player action game classics such as the Half-Life series of games. Set in the immediate aftermath of the long-awaited zombie apocalypse, L4D’s single player and co-op game modes are played out across four sprawling “Movies” set in a variety of urban and rural environments. Each “Movie” has an over-riding team objective, is comprised of five large maps, and may be played by 1 to 4 human players. New technology dubbed “the AI Director” is used to procedurally generate a different experience each time the game is played. Just as in Hollywood films, the Director calls for new monsters, sounds, and action as it tailors the gameplay experience based upon the team’s performance. In Left 4 Dead’s Vs. Mode players may play as a Survivor or as one of four types of “Boss Infected.” Each of the “Boss Infected” possesses an exceptional mutant ability • such as a 50-foot tongue lasso (Smoker) or a giant belly full of explosive methane gas (Boomer) • instead of traditional firearms. About the Survival Pack: The Left 4 Dead Survival Pack is a collection of new content for 2008’s Multiplayer Game of the Year. Headlining the pack is the new 1 to 4 person game mode, Survival, that challenges players and teams to “survive” unremitting swarms of zombies on over 10 maps. Rounds are scored by length of survival, and times will be uploaded to leader boards. Also included in the Survival Pack are two additional Versus campaigns. Each campaign features 5 maps for additional play of the four-on-four multiplayer game that allows players to compete as Boss zombies Versus the human Survivors. Features: -Addictive co-op action gameplay from the makers of Counter-Strike and Half-Life. -Winner of over 25 2008 Awards • named Multiplayer Game of the Year by virtually every media outlet. -100s of Zombies. -Four sprawling single player and co-op “Movie” campaigns. -4x4 Versus Mode -- play as the “Boss Infected.” -Survival Mode • 1 to 4 person quick match play. -Advanced artificial intelligence drives both friendly and unfriendly creatures to dynamically create intense single-player, co-op, and multiplayer experiences every time the game is played. -Match making, stats, rankings, and awards system drive collaborative play -Designer’s Commentary mode allows gamers to go “behind the scenes” of the game. -Powered by Source.
Save this product for later