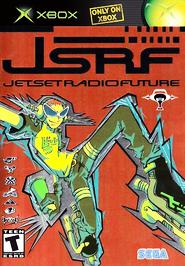 Two games on one disc!

SEGA GT 2002 features more than 100 current and classic high performance vehicles, created using the exact handling and performance specifications from their real-life counterparts. 'Chronicle' mode puts gamers behind the wheel of muscle cars from the 1970s and 1980s, while the 'Quick Battle' mode lets players jump right into the action with perfectly tuned modern machines. The 'SEGA GT 2002' mode is where the true test lies: win races and collect the necessary cash to buy new cars and upgrade the classics. Gamers can even showcase cars in the 'Virtual Garage' alongside trophies and other mementos. With astounding vehicle control, incredibly deep gameplay, and multiple modes to conquer, SEGA GT 2002 is one of the most realistic driving experiences available.

It's a vicious world out there, and you're just the in-line skater to make it even more vicious. Protect your territory and capture your opponents' in this tale of brutal rivalry. Armed with spray paint and a penchant for graffiti, you'll set out to cause mischief and pull off amazing stunts. Awesome controls allow for truly amazing tricks, and the gameplay is as epic as it is fun. Play alone, or challenge up to three friends to battle it out for territory and bragging rights.