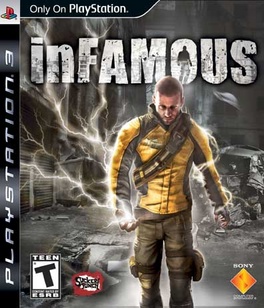 SKU 711719811923
$8.00
In stock
1
Product Details
A massive explosion rips through six square blocks of Empire City, leveling everything and killing everyone in its path... everyone, except you!. From the creators of the award-winning Sly Cooper series, Sucker Punch brings you inFAMOUS, an open-world action-adventure title exclusively for the PLAYSTATION®3 system. Players will feel what it's like to be granted incredible powers... how you use them is up to you. The consequences of your actions will affect you, the citizens, and the city around you. You'll develop and grow your powers, and eventually uncover the purpose of it all. EXPERIENCE Feel what it's like to wield extraordinary electrical-based powers; and grasp the responsibility that comes with it. Battle against powerful iconic villains and uncover your true purpose. Climb and interact with anything! Have complete freedom to explore Empire City. Scale the cityscape to discover new vantage points and engage in vertical combat. Play in a living and breathing city ecology. Watch the citizens and city react and evolve depending on your actions. Events will unfold based on the role you take, creating broader reactions in the city’s people and environment.
Save this product for later
Display prices in: USD