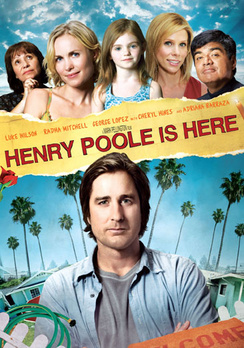 SKU 013138004499
$4.00
In stock
1
Product Details
Luke Wilson (The Royal Tenenbaums, Old School), Academy Award® nominee Adriana Barraza (Babel) and Radha Mitchell (Finding Neverland) star in a modern day fable about the unexpected wonders of the everyday from director Mark Pellington (U2 3D, The Mothman Prophesies). Henry Poole is Here tells the funny, poignant and uplifting story of a disillusioned man who attempts to hide from life in a rundown suburban tract home only to discover he cannot escape the forces of hope. Henry Poole (Luke Wilson) just wants to disappear. Shattered by circumstances beyond his control, he offers full price on a cookie cutter house in a drab, middle-class, L.A. neighborhood through his perky realtor Meg (Cheryl Hines). But just as he settles in to his indulgent isolation with a case of vodka and all the junk food he can eat, his neighbor, a well-meaning busybody named Esperanza (Adriana Barraza), drops by with a plate of homemade tamales and a whole lot of questions. Despite his desire for solitude, Henry can’t help noticing Dawn (Radha Mitchell), the beautiful young divorcée next door and her daughter Millie (Morgan Lily), an eight-year-old amateur spy who hasn't spoken a word since her parents' break-up. Henry's self-imposed exile is shattered when Esperanza discovers a mysterious stain on Henry's stucco wall that is seen to have miraculous powers. She begins leading pilgrimages to the 'holy site' and invites church officials, including her pastor, Father Salizar (George Lopez), to inspect the apparition. Although Henry remains skeptical, he finds himself gradually drawn back towards life, especially after his silent friendship with Millie brings him closer to Dawn. As news of the apparition spreads throughout the neighborhood and his feelings for Dawn grow, Henry realizes his plan to live out his days in quiet desperation is going to be much harder than he ever imagined.
Save this product for later