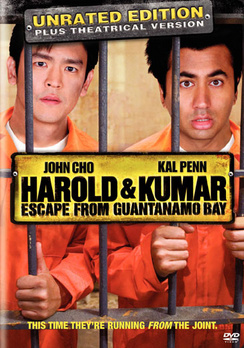 SKU 794043123115
$3.00
In stock
1
Product Details
Harold and Kumar Escape From Guantanamo marks the triumphant return of these two hilarious, slacker anti-heroes. The movie stars John Cho as Harold and Kal Penn as Kumar, two stoners who can't seem to get a break. Their last adventure found them traveling across country to find a White Castle hamburger in order to satisfy a weed-induced case of 'the munchies.' This time, the boys get themselves in trouble trying to sneak a bong onboard a flight to Amsterdam. Now, being suspected of terrorism, they are forced to run from the law and try to find a way to prove their innocence. What follows is an irreverent and epic journey of deep thoughts, deeper inhaling and a wild trip around the world that is as 'un-PC' as it gets.
Save this product for later