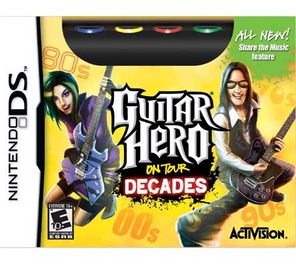 SKU 047875955394
$12.00
In stock
1
Product Details
Guitar Hero On Tour Decades expands the experience of Guitar Hero On Tour by taking players through a rock-and-roll journey from today’s rock through the classic rock of the 70s. Utilizing the revolutionary Guitar Hero Guitar Grip peripheral that fits in the Game Pak slot on the Nintendo DS, Guitar Hero On Tour Decades gives fans the ability to shred through time with their favorite tunes and customize their characters in decade-themed costumes and venues. The soundtrack features 28 master tracks from the great decades of music, including 21 that are exclusive to Guitar Hero On Tour Decades. For the first time, owners of Guitar Hero On Tour or Guitar Hero On Tour Decades will be able to stream over 50 songs from the two games using a local wireless connection. Guitar Hero On Tour Decades delivers the gameplay that players have come to expect and continues the ground-breaking on-the-go Guitar Hero experience Key Features Share the Music Stream over 50 songs between Guitar Hero On Tour Decades and Guitar Hero: On Tour using local wireless play A New Musical Offering: Rock out to 25 all new songs and 3 bonus tracks, with some of the greatest hits from each decade. Twenty one songs will be exclusive to Guitar Hero On Tour: Decades and 7 will be taken from Guitar Hero® World Tour. Announced song list: Modern: Foo Fighters • The Pretender 2000s: Red Hot Chili Peppers - Can’t Stop 1990s: Blind Melon - No Rain 1980s: Bon Jovi • You Give Love a Bad Name 1970s: Lynyrd Skynyrd • Sweet Home Alabama (Live) Unique, portable gaming experience for the Nintendo DS Rock Out to Guitar Hero on the DS with the Iinnovative Guitar Grip. Utilize local wireless play to shred with your friends in multiplayer mode and to share music Use the included pick-stylus to strum the touch activated screen and rock out on the go. Gameplay Modes: Single Player Mode: Prove your guitar shredding skills while navigating through Career, Quick Play or Guitar Duel modes. New career modes for Lead Guitar and Bass. Multiplayer Modes: Players can play: Face Off, Pro Face Off and Co-op and Guitar Duel together • all utilizing local wireless play. Practice Mode: Practice using the Guitar Grip and pick-stylus to nail those tricky solos. Authentic Rock Star Experience: Takes full advantage of Nintendo DS capabilities, including activating star power by yelling “Rock Out” into the DS microphone Attacks in Guitar Duel allow you to utilize the DS in a new way Blow into the DS microphone when the touch screen is set on fire in pyrotechnics Sign an autograph when it is requested by an excited fan Send your opponent a temporary screen flip to mess up their strumming All of the customization and personalization Guitar Hero fans enjoy: Select from eight characters including two new rockers who are making their debut on the DS. Deck out your rocker in costumes and venues themed for the decades.
Save this product for later