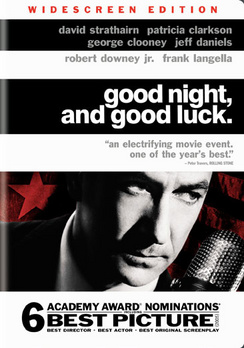 SKU 012569736788
$8.00
In stock
1
Product Details
Taking place during the early days of broadcast journalism in 1950s America, a chronicle of the real-life conflict between television news man Edward R. Murrow and Senator Joseph McCarthy and the House Un-American Activities Committee. With a desire to report the facts and enlighten the public, Murrow, and his dedicated staff defy corporate and sponsorship pressures to examine the lies and scaremongering tactics perpetrated by McCarthy during his communist witch hunts. A very public feud develops when the Senator responds by accusing the anchor of being a communist. In this climate of fear and reprisal, the CBS crew carries on regardless and their tenacity eventually pays off when McCarthy is brought before the Senate and made powerless as his lies and bullying tactics are finally uncovered.
Save this product for later