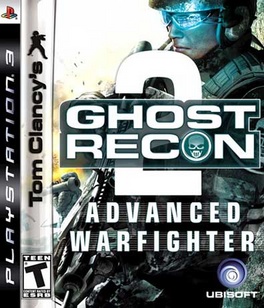 SKU 008888343479
$16.00
In stock
1
Product Details
Tom Clancy's Ghost Recon Advanced Warfighter 2 builds off of the events in the first game and places gamers in control of the U.S. military's elite fighting unit, the Ghosts. In the year 2014, the rising conflict between Mexican loyalists and insurgent rebel forces has thrown Mexico into full-scale civil war. Under the command of Captain Scott Mitchell, the Ghosts are called upon to face an imminent threat to the United States. The fate of two countries now lies in the hands of the Ghosts as they fend off an attack on U.S. soil. Equipped with the most cutting-edge weaponry and technology, the Ghosts must battle on both sides of the border to neutralize the escalating rebel threat. Groundbreaking Visual Experience: The war zone in Tom Clancy's Ghost Recon Advanced Warfighter comes to life as you navigate through trash-strewn streets and pick off enemies from behind bomb-scarred structures. The cutting-edge physics and particle systems will show you some of the most intense and realistic explosions, smoke, and environment destruction ever seen in a video game. Dynamic lighting and shadows will morph as real-time day/night cycles and a constantly changing weather system require you to adjust to the changing conditions on the fly. All-New Battlegrounds: For the first time ever, the Ghosts will defend U.S. soil from a cross-border attack, taking the fight to all-new locations. The Ghosts will battle enemies in mountain terrains, barren deserts and even on their home turf in El Paso, Texas. Each environment presents its own benefits and challenges and will call for fresh tactical approaches. Vastly Improved Artificial Intelligence (AI): Watch your back as rebels send their own team members to flank your position or gain vantage points by utilizing vertical gameplay to pick you off from the rooftops above. Improved squad-mate AI will now feed you more of the information you need with descriptive commands like 'enemy spotted behind red truck ahead.'
Save this product for later
Display prices in: USD