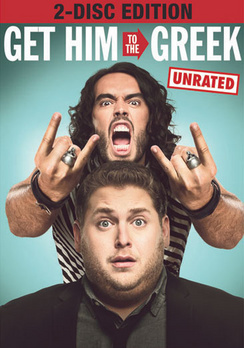 Get Him to the Greek Unrated - Widescreen - DVD - Used

Get Him to the Greek reunites Jonah Hill and Russell Brand with Forgetting Sarah Marshall director Nicholas Stoller in the story of a record company intern with two days to drag an uncooperative rock legend to Hollywood for a comeback concert. The comedy is the latest film from producer Judd Apatow (The 40-Year-Old Virgin, Knocked Up, Funny People).    Aaron Green (Hill) gets things done. The ambitious 23-year-old has exaggerated his way into a dream job just in time for a career-making assignment. His mission: Fly to London and escort a rock god to L.A.'s Greek Theatre for the first-stop on a $100-million tour. His warning: Turn your back on him at your own peril.    British rocker Aldous Snow (Brand) is both a brilliant musician and walking sex. Weary of yes men and piles of money, the former front man is searching for the meaning of life. But that doesn't mean he can't have a few orgies while he finds it. When he learns his true love is in California, Aldous makes it his quest to win her back... right before kick-starting his world domination.  As the countdown to the concert begins, one intern must navigate a minefield of London drug smuggles, New York City brawls and Vegas lap dances to deliver his charge safe and, sort of, sound. He may have to coax, lie to, enable and party with Aldous, but Aaron will get him to the Greek.