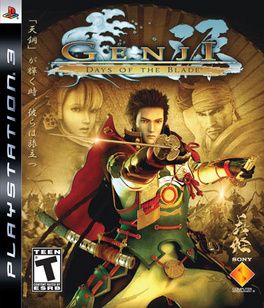 SKU 711719813125
$8.00
In stock
1
Product Details
The Tale of A Legendary Samurai Returns! Genji: Days of the Blade unveils beautiful next generation graphics and vastly improved gameplay onto the PlayStation 3. As one of the few Japanese/sword action games available on the PlayStation 3 during the launch window, Genji: Days of the Blade will capture the attention of the hardcore gamer/early adapter eager for a "traditional" gaming experience. With more hours of gameplay and more characters for diversified fighting styles, Genji: Days of the Blade promises to deliver a genuine action/adventure title for the PlayStation 3. * Twice as many missions as the original = twice the amount of gameplay (over 15 hours total). * Rich storyline influenced on historical Japanese events - 3 years after Genji: Dawn of the Samurai. * 4 playable characters interchangeable at any time, producing devastating team-based fighting combos. * Over hundreds of on-screen enemies and incredible fighting sequences on horseback.
Save this product for later