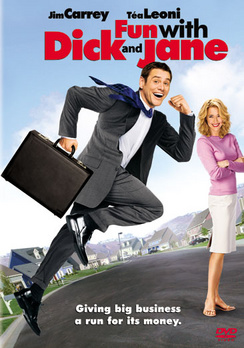 SKU 043396102286
$4.00
In stock
1
Product Details
When Dick Harper (Jim Carrey) is terminated as Globodyne Corporation's VP of Communications, he assures his wife, Jane (Tea Leoni), he'll find another job in no time. Months later, their lawn is repossessed, Jane has sold her body to science, and Dick's career as a day laborer ends with his deportation to Mexico. Madder than ever and not going to take it anymore, Dick and Jane turn to the fastest-growing sector in the white-collar job market -- armed robbery -- as they become upscale suburban Robin Hoods, stealing from the rich and giving to the poor -- namely themselves.
Save this product for later