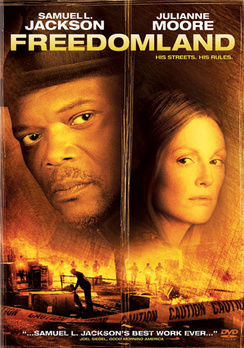 SKU 043396114401
$6.00
In stock
1
Product Details
Late one night in a working class New Jersey suburb, a bloodied woman staggers mute and dazed into the emergency room at the Dempsy Medical Center. After treatment for shock and hysteria, Brenda Martin (Julianne Moore) recounts to Dempsy police detective Lorenzo Council (Samuel L. Jackson) a horrific tale of being carjacked on the isolated strip of undeveloped land that divides Dempsy's urban housing projects from the blue collar town of Gannon, where she lives. She claims she was forced out of her car by a black man, but during the interrogation Council senses he's not getting the whole story. Only after hours of questioning does Brenda finally break down and confess that her four-year-old son, Cody, was asleep in the back seat of the stolen car. Led by activist Karen Collucci (Edie Falco), members of the communities of Dempsy and Gannon unite in a search for the missing child, but the criminal investigation into the alleged kidnapping by a suspect who is presumed to be a local from the projects soon ignites long-simmering racial tensions between the two towns.
Save this product for later