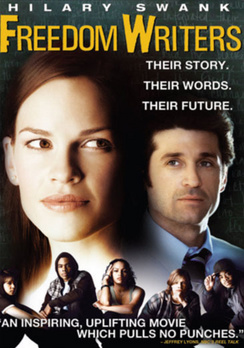 SKU 097363465041
$10.00
In stock
1
Product Details
'Freedom Writers' is inspired by a true story and the diaries of real Long Beach teenagers after the LA riots, during the worst outbreak of interracial gang warfare. Hilary Swank stars as Erin Gruwell, whose passion to become a teacher is soon challenged by a group of Black, Latino, and Asian gangbangers who hate her even more than each other. When Erin begins to listen to them in a way no adult has ever done, she begins to understand that for these kids, getting through the day alive is enough -- they are not delinquents but teenagers fighting 'a war of the streets' that began long before they were born. Erin gives them something they never had from a teacher before -- respect. For the first time, these teens experience a hope that maybe, they might show the world that their lives matter and they have something to say.
Save this product for later
Display prices in: USD