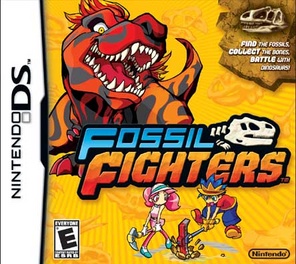 SKU 045496740412
$20.00
In stock
1
Product Details
Fossil Fighters blends the timeless human fascination with dinosaurs with the fun of building a collection. The game lets players build a collection of more than 100 fantastical dinosaurs known as “vivosaurs.” This new game incorporates elements of discovery, tactics and strategy as players try to get the best vivosaurs on their teams to battle it out on the field. Features Players dig for fossils and use the touch screen of the Nintendo DS or Nintendo Dsi™ system to hammer, chip, drill and brush away the bits of rock around the fossil. When their efforts result in the buildup of dust, players blow into the Nintendo DS microphone to blow the dust away. The game rates players on how well they handle the fossils during the cleaning process. The more carefully and completely a player cleans a fossil, the more powerful the vivosaur will be in battle. Vivosaurs can also gain more power through battles. Players must collect various parts of each vivosaur. The head must be found first to bring a vivosaur to life while the body, arms and legs can be added to increase its power on the battlefield and imbue it with special powers. The game features an engrossing role-playing storyline and vast environments for players to explore. Players can connect wirelessly with friends to battle or trade their fossils.
Save this product for later