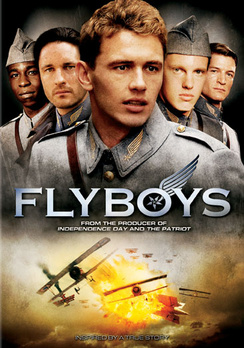 SKU 027616062246
$6.00
In stock
1
Product Details
In 1914, 'The Great War' - WWI - began in Europe. By 1917, the Allied powers of France, England, Italy and others were on the ropes against the German juggernaut. Some altruistic young Americans disagreed with the war. They volunteered to fight alongside their counterparts in France; some in the infantry, some in the Ambulance Corps. A handful of others had a different idea: they decided to learn how to fly. The first of them - a squadron of only 38 - became known as the Lafayette Escadrille. This is their story. Forced to abandon his family's ranch, Blaine Rawlings finds his future in a newsreel chronicling the adventures of young aviators in France. At a small train station in rural Nebraska, William Jensen promises to make his family proud. In New York, spoiled Briggs Lowry embarks on a trans-Atlantic passage. Meanwhile, in France, black expatriate boxer, Eugene Skinner, vows to repay his debt to his adopted racially tolerant country. Together, these American boys arrive at an aerodrome in France, eager to learn how to fly. What they didn't realize was that they were about to embark on a great, romantic adventure, becoming the world's first combat pilots.
Save this product for later