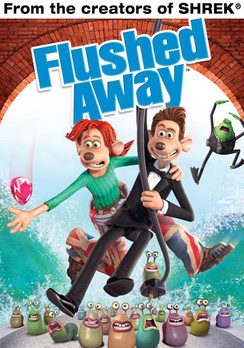 SKU 097361176840
$3.00
In stock
1
Product Details
Beneath the streets of London, Roddy St. James is a pampered pet mouse who thinks he's got it made. But when a sewer rat named Sid - the definition of 'low life' - comes spewing out of the sink and decides it's his turn to enjoy the lap of luxury, Roddy schemes to rid himself of the pest by luring him into the loo for a dip in the 'whirlpool.' Roddy's plan backfires when he inadvertently winds up being the one flushed away into the bustling world down below. Underground, Roddy discovers a vast metropolis, where he meets Rita, a street-wise rat who is on a mission of her own. If Roddy is going to get home, he and Rita will need to escape the clutches of the villainous Toad, who royally despises all rodents and has dispatched two hapless henchrats, Spike and Whitey, as well as his cousin - that dreaded mercenary, Le Frog - to see that Roddy and Rita are iced, literally.
Save this product for later