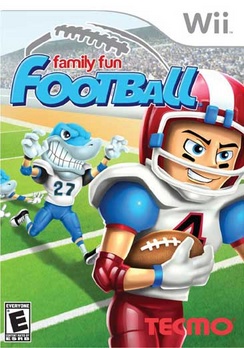 SKU 018946010632
$8.00
In stock
1
Product Details
In this fun, arcade-style casual sports game for everyone to enjoy, play against friends and family in vibrant themed football stadiums, or perhaps even in space! Choose to be one of the game's quirky characters, featuring animals, aliens and robots, or unlock the mode to play as your own Mii. The ability to coach teams with a simple offensive and defensive playbook coupled with intuitive Wii Remote™ controls makes the game appealing to all ages for a fun pick-up and play party experience. Features Simple Playbook: Catering to the casual gamers, Family Fun Football offers a coaching playbook that makes it easy for everyone to learn and understand the game of football. Colorful Stadiums: There will be a total of five stadiums that include a fun mix of realistic and fantasy worlds such as a space themed stadium. Power-ups: During gameplay, each player can be rewarded with a power-up from a slot-style system that can enhance certain attributes including speed, strength, passing, and interception for a limited amount of time. Mini-Games: Ten fun and simple mini-games can be played with up to four players. Teams: Ten unique teams with their own attributes that players can choose to play competitively with. Mascot Mode: Players can play as their default character or their team's mascot in Mascot Mode! Mascots include animals, aliens and robots and additional, unlockable mascot heads. Mii™ Compatibility: Unlock the ability to play as your Mii and load in your own caricatures and play against your friends' and family's Miis for a more personal experience.
Save this product for later