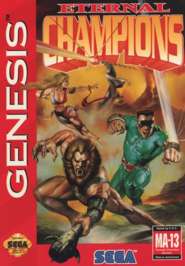 SKU 010086011456
$5.00
In stock
1
Product Details
A mythical entity known as the Eternal Champion has summoned nine of the greatest warriors who ever livedﾗand who are all dead nowﾗin order to find the one who is brave and noble enough to save the entire planet from impending doom. Through the tournament of the ETERNAL CHAMPIONS, one fighter will emerge and will have the chance to avenge his or her own death as they fight to save the planet. You can play as any of the nine characters, whose martial arts mastery cover the spectrum, from Praying Mantis Kung Fu to Kenpo to Ninjitsu. Each combatant has a unique set of special moves, and mastering each is paramount to winning the tournament. Whether you're playing alone or against a friend, you'll find plenty of intense fighting action with ETERNAL CHAMPIONS.
Save this product for later
Display prices in: USD