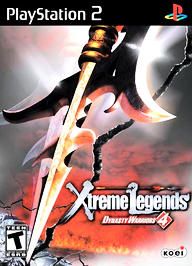 SKU 040198001298
$15.00
In stock
1
Product Details
The DW4XL site is a definite step forward in the evolution of KOEI’s web presence, said Ben Stockwell, Webmaster for KOEI Corporation. “The full screen format is the ideal showcase for the rich game visuals and character designs. The downloads and game information, which will be continuously updated, will give gamers plenty of reasons to keep coming back for more.”Consumers eager to reserve their copy of DYNASTY WARRIORS 4 XTREME LEGENDS for the PlayStation2 computer entertainment system can pre-order the title now Playable as a standalone game and as an expansion disc, Dynasty Warriors 4 Xtreme Legends includes all of the characters from the original Dynasty Warriors 4, plus new elements, and new stages. DW4XL’s Xtreme Mode features a series of randomly generated short stages, or “skirmishes” and new game play that hasn’t been seen in any previous Dynasty Warriors title. The game’s Legend Mode focuses on the fabled exploits of the 42 warriors, and shows off each commander’s prowess in battle. In the new Arena Challenge, players engage in a series of endurance style one-on-one duels and then are evaluated on their performance. As a remix disc, DW4XL can power up the original Dynasty Warriors 4 for PlayStation 2 with 4XLs new features. Players can take characters powered-up in DW4XL and use them in DW4, discover new items, attain an 11th weapon level, and access “Beginner” and “Expert” difficulty levels.
Save this product for later