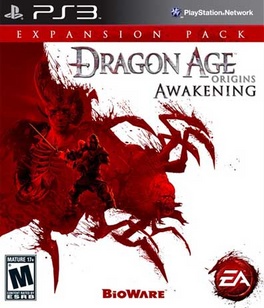 SKU 014633194203
$15.00
Out of stock
1
Product Details
Designed and written by the same team that brought you Dragon Age: Origins, the Awakening expansion pack offers a brand new area of the world to explore known as Amaranthine, featuring an epic story that will allow players to unravel the secrets of the darkspawn - and their true motivations! Players will face a range of horrific and terrifying creatures including an evolved, intelligent breed of darkspawn and other menacing creatures such as the Inferno Golem and Spectral Dragon. Dragon Age: Origins Awakening provides exciting new ways for players to customize their heroes and party, including the ability to re-spec their character attributes, allowing even greater customization and replayability. Featuring an increased level cap, new spells, abilities, specializations and items, plus five all-new party members, players can continue their adventures from Dragon Age: Origins, or begin with a brand new character. Dragon Age: Origins Awakening, BioWare’s next thread in the Dragon Age: Origins tapestry, occurs following the events of Dragon Age: Origins and puts players into the role of a Grey Warden Commander entrusted with rebuilding the order of Grey Wardens. In addition to rebuilding the ranks of the Grey Wardens, you will be tasked with uncovering the mystery of how the darkspawn survive after the slaying of the Archdemon. How players choose to rebuild their order, resolve the conflict with the mysterious “Architect,” and determine the fate of the darkspawn are just some of the many intriguing moral choices that will shape each player’s heroic journey. Players will be able to import their character from Dragon Age: Origins or start out as a new Grey Warden from the neighboring land of Orlais.
Save this product for later
Display prices in: USD