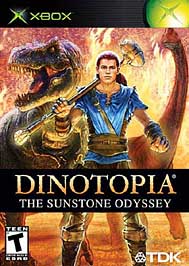 SKU 739069640161
$10.00
Out of stock
1
Product Details
Based on the award-winning book series written by James Gurney, Dinotopia brings to life a mysterious world where dinosaurs and humans peacefully coexist. The game follows the story of Drake Gemini, a young boy who begins a quest to reunite his family and to defend Dinotopia from a band of marauding pirates. The action takes place from a third-person perspective as players explore the tropical island's swamps, villages, jungle ruins, and treetop town. Since Drake can only go so far while on foot, players can call upon the help of a flying dinosaur named Skybax or a robotic creature called Strutter to cross potentially hazardous terrain.
Save this product for later
Display prices in: USD