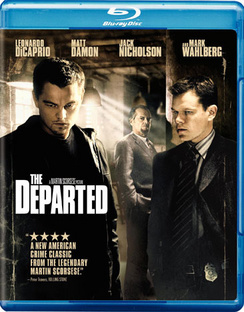 SKU 085391117292
$6.00
In stock
1
Product Details
Year: 2006
Rated: R, strong brutal violence, pervasive language, some strong sexual content and drug material
Genre: Crime, Suspense
Runtime:
Studio: Warner Bros.
Directed by: Martin Scorsese
Starring: Leonardo DiCaprio, Matt Damon, Jack Nicholson, Mark Wahlberg, Martin Sheen, Ray Winstone, Vera Farmiga, Anthony Anderson, Alec Baldwin, Kevin Corrigan
Description: The Departed is set in South Boston, where the state police force is waging war on organized crime. Young undercover cop Billy Costigan (Leonardo DiCaprio) is assigned to infiltrate the mob syndicate run by gangland chief Costello (Jack Nicholson). While Billy is quickly gaining Costello?s confidence, Colin Sullivan (Matt Damon), a hardened young criminal who has infiltrated the police department as an informer for the syndicate, is rising to a position of power in the Special Investigation Unit. Each man becomes deeply consumed by his double life, gathering information about the plans and counter-plans of the operations he has penetrated. But when it becomes clear to both the gangsters and the police that there?s a mole in their midst, Billy and Colin are suddenly in danger of being caught and exposed to the enemy ? and each must race to uncover the identity of the other man in time to save himself.
Save this product for later