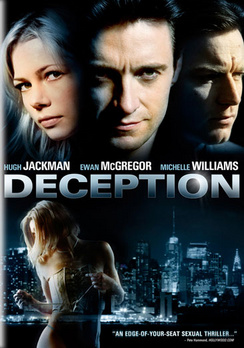 SKU 024543526216
$6.00
In stock
1
Product Details
A simple enough question, but how Jonathan McQuarry (EWAN McGREGOR) answers it will change his life forever. A corporate auditor adrift in a sea of New York's power elite, Jonathan's work is his entire life. But a chance meeting with Wyatt Bose (HUGH JACKMAN), a charismatic corporate lawyer, introduces Jonathan to a decadent playground for Manhattan's executive upper crust. For these power brokers, whose eighteen-hour workdays leave no time for a personal life, there's 'The List' - a sex club, of sorts, where the right cell-phone number and four simple words ('Are you free tonight?') can lead to an evening's sexual fulfillment. It's a world of 'intimacy without intricacy,' as Jonathan's first conquest (or vice versa) explains to him, and through The List Jonathan discovers a side of himself that he didn't know existed. But an affair with a ravishing and mysterious stranger known to Jonathan only by her first initial 'S' (MICHELLE WILLIAMS), will expose him to yet another world he never imagined - one of betrayal, treachery and murder.
Save this product for later