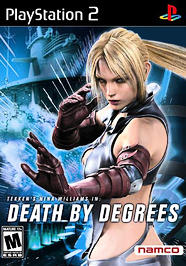 SKU 722674100182
$12.00
In stock
1
Product Details
Nina Williams is the gorgeous, lightning-fast assassin who made her debut in the Tekken series. In DEATH BY DEGREES, Nina is commissioned to investigate the whereabouts of a stolen high-tech weapon, and steps out of the ring on an intense action adventure all her own. With an innovative 360 degree fighting system and a fluid, acrobatic hand-to-hand combat engine at her disposal, Nina must infiltrate a shadowy underworld and reveal conspiracy on a global scale. Use any means necessary including stealth, espionage, ferocious gunplay and brutal weapon attacks to recover the stolen goods and uncover the truth.
Save this product for later