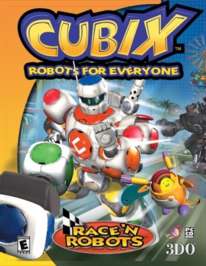 SKU 790561525110
$3.00
In stock
1
Product Details
Dr. K has it in for everyone, and you're the only hope of defeating him! Based on the popular cartoon series, CUBIX: Robots for Everyone, the video game is all about the series' racing aspects. The story of the cartoon centers on Connor, a human boy, and his robot, Cubix, as they repair robots and meet crazy characters in Bubble Town. The game allows you to race as popular personalities like Hop2ix, Brutix, Don-Don, Diagnostix, and Cubix, earning power-ups and trying to defeat the nefarious Dr. K and his wicked Kolossal racer.
Save this product for later
Display prices in: USD