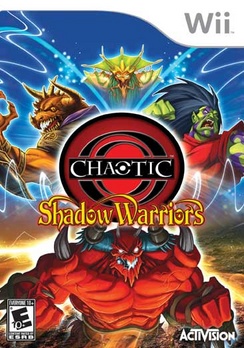 SKU 047875760615
$8.00
In stock
1
Product Details
From the licensors of Pokémon® and Yu-Gi-Oh!®, Chaotic is the ground-breaking collectible card game where players can battle opponents in person using their cards, and/or play online at ChaoticGame.com by uploading each card’s unique alphanumeric code. Chaotic’s differentiation is two-fold. First, no two Creature Cards are alike with each having a unique code and power structure! Second, players play the game both face-to-face and online in the Battledromes. Fans can also experience the world of Chaotic in the top-rated cartoon series on the 4kidsTV channel. Battle to Victory in a World where Might Equals Right Enter the realm of Chaotic and assume the role of one of its Creatures in this turn-based arena combat fighting game. Engage in explosive animated onslaughts that combine brutal melee attacks with vicious ranged assaults. Collect formidable battlegear, cast devastating mugic spells, and boost your creatures’ powers as you unleash high energy attacks in your quest to master the merciless.
Save this product for later
Display prices in: USD