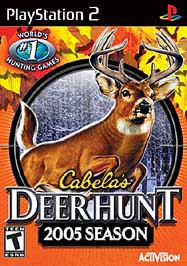 SKU 047875750333
$12.00
In stock
1
Product Details
CABELA'S DEER HUNT 2005 SEASON raises the bar by which all-hunting video games will be measured. This game is a must for your PlayStation2, Xbox or PC. All-new enhanced graphics, a larger selection of gear, added gameplay elements and a new unlocking system are just a few of the features you'll find in this year's Deer Hunt: 2005 Season video game. One of the new gameplay elements includes clay shooting for fast-paced shooting action. Test your skills on the range as you compete in trap, skeet and sporting clays. All new to Career Mode complete 18 different missions that involve taking a specified animal with a certain gun, or within a time limit or yardage range. As you complete missions you'll unlock items such as guns, GPS, gear and more. Not only can you unlock specific items, you can also unlock private ranches where you can hunt exotic deer species.
Save this product for later
Display prices in: USD