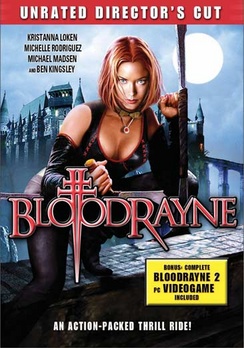 SKU 855280001380
$4.00
In stock
1
Product Details
The film reveals the origins of Bloodrayne in the cinematic prequel to Majesco's popular videogame. In eighteenth century Romania, Rayne, a young dhampir (half-human, half-vampire), prone to fits of blind blood rage but saddled with a compunction for humans, strives to avenge her mother's rape and murder by her father, Kagan, King of the Vampires. Orphaned and forced to find refuge in a circus freak show, the only place her aberrant abilities are tolerated, Rayne does not discover her true abilities till the night she tastes human blood for the first time defending herself from the circus strong man. Consumed by bloodlust and tormented by her new identity, she transforms into BloodRayne and feeds on the blood of vampires, refusing to take the lives of innocents. Two vampire hunters, Sebastian and Vladimir, from the Brimstone Society persuade her to join their cause to destroy the most evil and powerful of all the vampires in the land, her father. She races to find the three Talisman organs: a heart, an eye and a rib wrought from her ancestor vampire, Beliar, which Kagan also covets. The Talismans give the beholder the power to throw the earth into darkness allowing vampires to rule forever.
Save this product for later