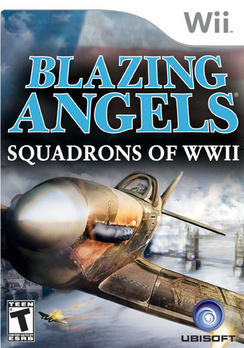 In Blazing Angels Squadrons of WWII, players test their air-combat skills as they experience the most famous battles of World War II. As a squadron leader, players can fly up to 38 WWII aircraft in both single-player and multiplayer missions. The game features squadron-based combat, in which each artificial intelligence wingman's specialized skill can be used to the pilot's advantage. As a squadron leader and ace fighter pilot, you take command of your fighting craft with the Wii controller to experience intense dog fighting in the famous air battles of WW II. Pilots fly in close to Germany