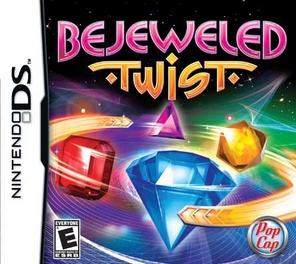 SKU 899274001772
$16.00
In stock
1
Product Details
In Bejeweled Twist, players rotate 2x2 blocks of gems in an effort to create a line of three or more gems of the same type. They don’t have to match every move instead they can freely rotate gems anywhere on the board, allowing increased strategic freedom to plan combinations, cascades and chains of various matches. With its phenomenal production values, Bejeweled Twist bedazzles players with a wealth of new power-ups and obstacles. New gem types include Flame, Lightning and Fruit gems that produce fiery explosions and other powerful effects; and new obstacles such as Bomb and Locked gems as well as Coal will challenge players as never before. Additionally, a host of new game modes offer vastly different ways to experience Bejeweled Twist. Bejeweled Twist for DSiWare features the addicting gameplay of Classic and Multiplayer modes, offering infinite replayability. Bejeweled Twist DS is a full-featured version containing even more gameplay action, including three additional game modes: Zen (for a quick stress-busting experience), Blitz (for past-paced action to challenge even the most hardcore players) and Challenge (featuring infinite action and multiple levels of difficulty). This is the first time that Bejeweled Twist has been ported to any video game console.
Save this product for later