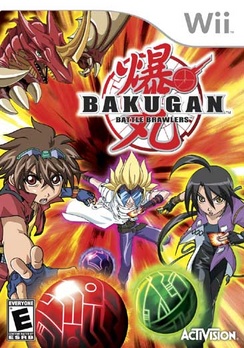 SKU 047875760035
$3.00
In stock
1
Product Details
Bakugan is the first video game based on the smash hit Bakugan toys, card game and anime show. In it, players start off as an untrained Bakugan Brawler and must fight their way to the top of the heap. Combining the drama and story of the cartoon series with the skill and strategy of the card game, players will become completely immersed in this unique title. Throw Bakugan cards onto the battlefield, and then try to carefully shoot your Bakugan balls onto the cards to unleash their monstrous powers. When two Bakugans stand on the same card, they transform into gigantic creatures and fight to the finish! Features Major Brand Popularity: Bakugan was the best selling toy for boys this past holiday season, and won three Toy of the Year awards at February’s Toy Fair convention, including Toy of the Year. Bakugan toys are currently selling at a rate of 4 Bakugan Balls per second in North America, and there are over 55 million Bakugan Balls in homes across the world. Deep Storyline: Take part in an epic and unique story penned by the writers of the anime series specifically for the video game. Unique Battle Arenas: Choose from a variety of arenas to battle in, each with its own shape, size, traps and features. Create Your Own Bakugan Brawler: Make your avatar that you play as throughout the game, or play as your favorite character from the anime series. New Bakugan: Collect up to 40 Bakugan and hundreds of cards, some of which have never been seen before! Multiplayer: Face off in custom matches where players can adjust the arena, characters, and even the rules themselves.
Save this product for later