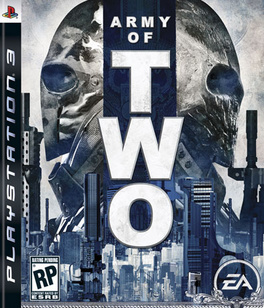 You're not alone soldier, not anymore. Army of Two will redefine strategic TWO man cooperative play. ARMY OF TWO will throw gamers into hot spots ripped from current day headlines where they will utilize unique TWO man strategies and tactics while seamlessly transitioning between playing with intelligent Partner AI (PAI) and a live player. When one man is not enough, it will take an army of two to fight through war, political turmoil and a conspiracy so vast it threatens the entire world. Two Man Gameplay – Co-op is no longer a mode, it's the game. Team up with a live or AI partner on two-man missions using two-man tactics to ultimately create an advantage that no enemy can withstand. Partner AI – ARMY OF TWO delivers intelligent partner AI (PAI) that interacts, adapts, collaborates and learns from their human partner. The PAI will also react and adjust to the gamer's ability and how they play the game by taking the lead or following, driving strategy or taking orders. It is the dream of the human machine. Customizable Weapons – Customize and upgrade dozens of deadly weapons and share them with your partner off or online. Dynamic Environments – EA's Montreal studio pulled out all the stops to deliver realistic character and environmental effects including fluid dynamics that showcase open-ocean water-wave simulation as well as High Dynamic Range (HDR) lighting. Contemporary Storyline Ripped from the Headlines – ARMY OF TWO will captivate gamers with a politically charged storyline, centering on the impact and ethical issues of Private Military Corporations. Online Gameplay – ARMY OF TWO redefines TWO MAN online gameplay with players seamlessly moving from PAI to live players as they make their way through the game.