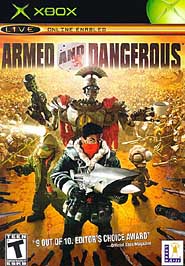 SKU 023272403751
$10.00
Out of stock
1
Product Details
ARMED & DANGEROUS is a squad shooter that is set in the distant future and stars you as a ruthless gang leader named Roman who decides to overthrow an oppressive king with the help of his three man crew, dubbed the Lionhearts. You have to guide your team in 21 missions across Planet Milola and survive in order to reign supreme if you are upto it !!!
Save this product for later