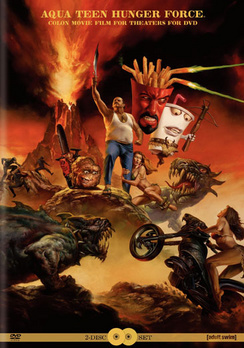 SKU 053939791921
$10.00
In stock
1
Product Details
Aqua Teen Hunger Force Colon Movie Film for Theaters is an action-adventure epic that tackles the mysterious circumstances that brought Meatwad, Frylock and Master Shake together. An immortal piece of exercise equipment threatens the balance of galactic peace, and it is up to the Aqua Teen Hunger Force to run away from it. Complicating matters, the Plutonians team up with the Cybernetic Ghost of Christmas Past for ultimate control of the deadly device. Spanning the globe, outer space and even time itself, Aqua Teen Hunger Force Colon Movie Film for Theaters was written and produced by Matt Maiellaro and Dave Willis. It is based on their successful Adult Swim series. Reprising their roles in the movie will be Willis (voice of Carl, Meatwad and Ignignokt) and Maiellaro (Err, Cybernetic Ghost of Christmas Past), Dana Snyder (Master Shake), Carey Means (Frylock), Andy Merrill and Mike Schatz (The Plutonians). Guest stars including Larry Blackmon and T-Man of platinum-selling funk band Cameo, Neil Peart of power trio Rush and Bruce Campbell.
Save this product for later