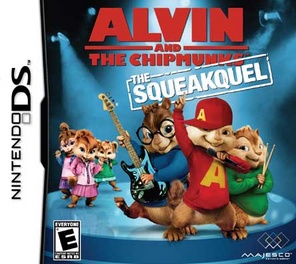 SKU 096427016359
$10.00
Out of stock
1
Product Details
In Alvin and The Chipmunks: The Squeakquel, players can play as Alvin and The Chipmunks (Alvin, Simon, Theodore) or The Chipettes (Brittany, Jeanette, Eleanor). Musical sparks ignite as they jet around the world, rock the house in 25 concert locations on Wii and 11 in the Nintendo DS version, and perform together in the ultimate concert finale. Featuring songs from the Grammy and American Music Award-winning Alvin and The Chipmunks library, the game lets players use the Wii Remote and Nunchuk or Nintendo DS stylus to keep the rhythm in the main game and in three mini-games. Players will gain thousands of fans by keeping the band on tempo through songs that grow more challenging and complex. Offering hours of replayability and family fun, Alvin and The Chipmunks: The Squeakquel provides gamers the freedom to redo their performance in any of the venues with the associated music tracks that feature The Chipmunks, The Chipettes, or a duet with both bands. After beating the game in Normal Mode or breaking six attendance records, Expert Mode will be unlocked offering an even higher level of difficulty. In addition, Jukebox Mode lets players enjoy their favorite unlocked songs while watching music videos, and Multiplayer Party Mode lets them play with up to two friends on Wii or up to three friends on Nintendo DS.
Save this product for later
Display prices in: USD