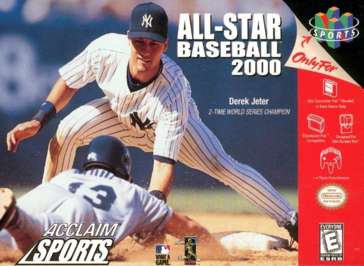 SKU 021481641759
$3.00
In stock
1
Product Details
The smash follow-up to Acclaim's classic ALL-STAR BASEBALL '99, ALL-STAR BASEBALL 2000 offers the same great gameplay and 30 licensed Major League Baseball teams with rosters from the 1999 season. You can hurl fastballs from the mound and swing for the fences in all 30 major league parks. Michael Kay and John Sterling are in the booth and ready to call the action, whether you're simulating the 1999 season, or playing with your own custom team.
Save this product for later