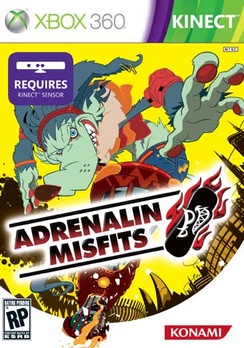 SKU 083717300984
$10.00
In stock
1
Product Details
Experience Konami’s first ever Microsoft Natal title with full body motion controls! Adrenalin Misfits thrusts gamers into 7 unbelievable fantasy worlds with exciting boarding battles in amazing environments. Compete in cross boarding action through freestyle, time and collection challenges against boss characters each with unique abilities. Battle Boss’ from around the world growing your abilities and gaining more impressive boards each with their own special features. Win a race, steal that boss’ board and do battle to collect all 60. Natal controls mean anyone can play because your body is the controller. The Natal camera reads your body’s natural motions converting them into character actions on screen. It’s not just a race, it’s a battle! Natal full body motion controls mean anyone can compete and play in single player mode or two player battles Perform tricks slide and glide in this snowboard inspired sliding game by moving your head, feet and body Natal sound controls mean that the more your friends and family cheer the faster your rider will go Race through 7 unique fantasy worlds including the snowy mountain, stormy desert, glacier lands, limestone caves, volcanoes and more Compete, win and become one of 7 monsters you just defeated or play as an original avatar or XBOX 360 avatar Win tournaments and acquire as many as 60 cross boards each with special abilities Various items scattered around the course can be added to your cross board to amp up your boards abilities like speed boosts, special attack powers and shooting abilities Track rankings, time and scores with anyone in the World via live leader boards Challenges include time challenges, fly distance, balloon buster, stadium mini-games, big air, terrain park, half pipe and more
Save this product for later
Display prices in: USD