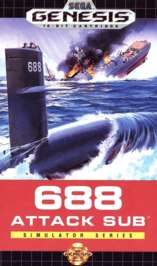 SKU 010086014013
$5.00
In stock
1
Product Details
You're the commander of the Los Angeles, a powerful 688 SSN nuclear attack sub, and your mission is to seek out and destroy a Soviet Typhoon-class missile sub. You see, you aren't the only one playing predator in the depths of the ocean; you'll be up against all kinds of Soviet subs that are on the lookout for you. The entire Western World is depending on this mission, so take control...and don't come back without a confirmed kill!
Save this product for later
Display prices in: USD