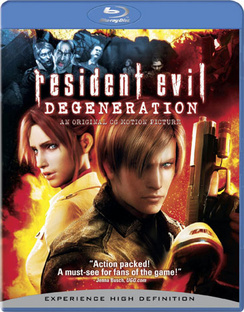 SKU 043396261327
$8.00
Out of stock
1
Product Details
Year: 2008
Rated: R, bloody violence
Genre: Horror, Science Fiction
Runtime:
Studio: Sony Pictures
Directed by: Makoto Kamiya
Starring: Alyson Court (voice), Paul Mercier (voice)
Description: A zombie attack brings chaos to Harvardville Airport. Leon S. Kennedy and Claire Redfield, former special forces members during the Raccoon City tragedy 7 years ago, are back. In high-octane Resident Evil style, they're ready to battle a rogue warrior who is seeking revenge after his family was killed in Raccoon City. The deadly G-Virus is unleashed and a new mutated monster goes on the rampage. Will Claire and Leon be able to terminate the virus before history repeats itself?
Save this product for later