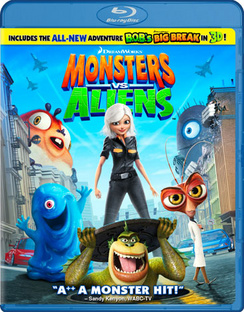 SKU 097360716245
$18.00
In stock
1
Product Details
When Susan Murphy is unexpectedly clobbered by a meteor full of outer space gunk, she mysteriously grows to 49-feet-11-inches tall and is instantly labeled a “Monster” named Ginormica. The military jumps into action, and she is captured and held in a secret government compound filled with other “monsters” like herself. This ragtag group consists of the brilliant but insect-headed Dr. Cockroach, P.H.D.; the macho half-Ape-half-fish The Missing Link; the gelatinous and indestructible B.O.B.; and the 350-foot grub called Insectosaurus. Their confinement time is cut short however, when a mysterious alien robot lands on Earth and the motley crew of Monsters is called into action to save the world from imminent destruction.
Save this product for later
Display prices in: USD