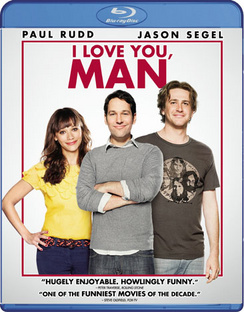 SKU 097360714746
$10.00
Out of stock
1
Product Details
Year: 2009
Rated: R, pervasive language, including crude and sexual references
Genre: Comedy, Romance
Runtime:
Studio: DreamWorks
Directed by: John Hamburg
Starring: Paul Rudd, Jason Segel, Rashida Jones, Jaime Pressly, J.K. Simmons, Andy Samberg, Jane Curtin, Jon Favreau, Rob Huebel, Colleen Crabtree
Description: In “I Love You, Man,” a comedy from John Hamburg, Peter Klaven (Paul Rudd) is a successful real estate agent who, upon getting engaged to the woman of his dreams, Zooey, (Rashida Jones), discovers, to his dismay and chagrin, that he has no male friend close enough to serve as his Best Man. Peter immediately sets out to rectify the situation, embarking on a series of bizarre and awkward “man-dates,” before meeting Sydney Fife (Jason Segel), a charming, opinionated man with whom he instantly bonds. But the closer the two men get, the more Peter’s relationship with Zooey suffers, ultimately forcing him to choose between his fiancée and his new found “bro,” in a story that comically explores what it truly means to be a “friend.”
Save this product for later