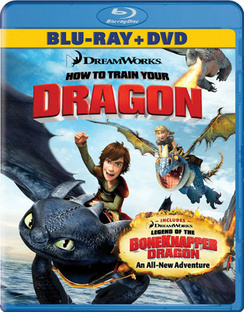 How to Train Your Dragon - DVD + Blu-ray - used

SKU 097360824445
$12.00
In stock
1
Product Details
Year: 2010
Rated: PG, sequences of intense action and some scary images, and brief mild language
Genre: Family, Adventure
Runtime:
Studio: DreamWorks
Directed by: Dean DeBlois, Chris Sanders
Starring: Jay Baruchel (voice), Gerard Butler (voice), America Ferrera (voice), Craig Ferguson (voice), Jonah Hill (voice), Christopher Mintz-Plasse (voice), Kristen Wiig (voice), T.J. Miller (voice)
Description: Set in the mythical world of burly Vikings and wild dragons, and based on the book by Cressida Cowell, the action comedy tells the story of Hiccup, a Viking teenager who doesn't exactly fit in with his tribe's longstanding tradition of heroic dragon slayers. Hiccup's world is turned upside down when he encounters a dragon that challenges he and his fellow Vikings to see the world from an entirely different point of view.
Save this product for later