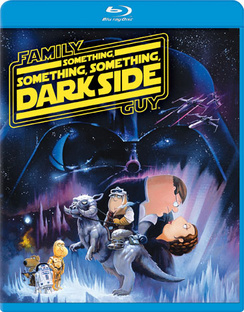 SKU 024543626992
$12.00
In stock
1
Product Details
The story of The Empire Strikes Back is retold. Darth Vader (Stewie) is hunting the rebel Luke Skywalker (Chris) and his troops relentlessly across the galaxy. On the ice planet Hoth, Luke has a vision of his late mentor Obi-Wan Kenobi (Herbert), telling him to go to the Dagobah system to learn the ways of the Force under Jedi Master Yoda (Carl). Meanwhile Princess Leia (Lois) finds herself taking a shine to the scruffy pilot Han Solo (Peter) and, against all odds, the two soon fall in love. But an encounter with Han’s old friend Lando Calrissian (Mort) lands them in the clutches of the Empire. Envisioning this, Luke chooses to forgo his Jedi training to save his friends. It all comes to a head in a climactic confrontation with Darth Vader himself.
Save this product for later