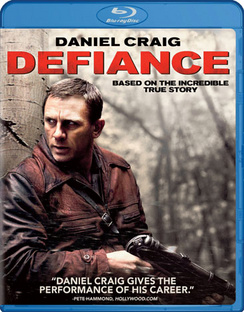 SKU 097361428741
$6.00
In stock
1
Product Details
Year: 2008
Rated: R, violence and language
Genre: Drama, War
Runtime: 137
Studio: Paramount Vantage
Directed by: Ed Zwick
Starring: Daniel Craig, Alexa Davalos, Jamie Bell, Liev Schreiber, George McKay, Mark Feuerstein, Tomas Arana, Mia Wasikowska, Jodhi May
Description: Four Jewish brothers living in Nazi occupied Poland escape into the forest where they join up with Russian resistance fighters in battling the Nazis. Throughout the war they built a village inside the forest and saved the lives of more than 1200 other Jews. Based on a true story.
Save this product for later