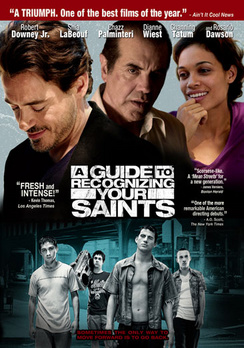 A Guide to Recognizing Your Saints - DVD - Used

SKU 687797113696
$6.00
In stock
1
Product Details
A Guide to Recognizing Your Saints is the winner of both the Dramatic Directing Award and a Special Jury Award for Best Ensemble Performance at the 2006 Sundance Film Festival. A coming-of-age drama about writer/director Dito Montiel's youth, the film captures the mid-1980s in the toughest neighborhood of Astoria, Queens. Dito (Robert Downey Jr.), called home after 15 years because his father (Chazz Palminteri) is ill, encounters old friends -- the ones he lost, the ones he left behind the ones he can't help but remember. These are Dito's 'saints'. An honest account of a bittersweet return to a neighborhood where relationships can never be what they once were, Dito's story is about coming to terms with a father's rage and a father's love.
Save this product for later
Display prices in: USD