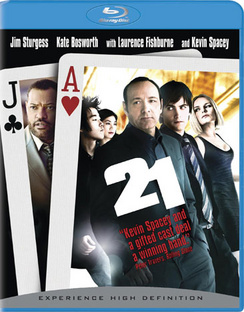 SKU 043396215290
$6.00
Out of stock
1
Product Details
Year: 2008
Rated: PG-13, some violence, and sexual content including partial nudity
Genre: Action, Suspense
Runtime: 123
Studio: Sony Pictures
Directed by: Robert Luketic
Starring: Jim Sturgess, Kate Bosworth, Laurence Fishburne, Kevin Spacey, Liza Lapira, Aaron Yoo, Spencer Garrett, Josh Gad, Sam Golzari, Jack McGee
Description: Ben Campbell (Jim Sturgess) is a shy, brilliant M.I.T. student who -- needing to pay school tuition -- finds the answers in the cards. He is recruited to join a group of the school's most gifted students that heads to Vegas every weekend armed with fake identities and the know-how to turn the odds at blackjack in their favor. With unorthodox math professor and stats genius Micky Rosa (Kevin Spacey) leading the way, they've cracked the code. By counting cards and employing an intricate system of signals, the team can beat the casinos big time. Seduced by the money, the Vegas lifestyle, and by his smart and sexy teammate, Jill Taylor (Kate Bosworth), Ben begins to push the limits. Though counting cards isn't illegal, the stakes are high, and the challenge becomes not only keeping the numbers straight, but staying one step ahead of the casinos' menacing enforcer: Cole Williams (Laurence Fishburne).
Save this product for later