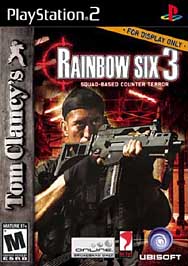 SKU 008888320494
$10.00
In stock
1
Product Details
It is a brutal kind of warfare, which strikes with ferocious, singular purpose and with little or no warning. The entire world is its battleground, leaving no civilian safe. As terrorism threatens to unhinge the free world, leaders scramble to assemble an effective response force: Team RAINBOW, an elite multinational force of counter terrorist operatives who are as secret and deadly as the terrorists themselves.
Save this product for later