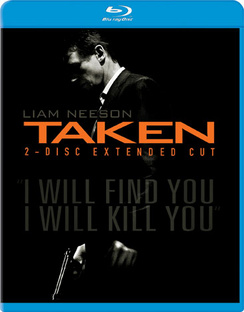 SKU 024543554691
$10.00
In stock
1
Product Details
Year: 2009
Rated: PG-13, intense sequences of violence, disturbing thematic material, sexual content, some drug references and language
Genre: Action, Suspense
Runtime: 93
Studio: Fox
Directed by: Pierre Morel
Starring: Liam Neeson, Maggie Grace, Famke Janssen, Katie Cassidy, Jon Gries, Holly Valance, Xander Berkeley, Olivier Rabourdin, Rasha Bukvic, Nicolas Giraud
Description: “I don’t know you who you are. I don’t know what you want. If you’re looking for a ransom, I can tell you, I don’t have money. But what I do have are a very particular set of skills acquired over a very long career in the shadows, skills that make me a nightmare for people like you. If you let my daughter go now, that will be the end of it. I will not look for you, I will not pursue you. But if you don’t, I will look for you, I will find you. And I will kill you.” With these chilling words to a member of a band of kidnappers, former government operative Bryan Mills begins the longest 96-hours of his life – and the hunt for the fearsome organization that has taken his daughter Kim. Mills had only recently given up his government career as what he calls, a “preventer” – “I prevented bad things from happenings,” he says – to be near Kim, who lives with Bryan’s ex-wife Lenore and her new husband. To make ends meet, Bryan joins some former colleagues for special security details (like guarding a pop diva), but most of his time and energy are spent re-connecting with Kim. Bryan’s familial goal is nearly derailed when Kim requests his permission to spend time in Paris with a friend. All too aware of the dangers that could lie ahead for Kim in a foreign land, Bryan says no, but Kim’s disappointment leads him to very reluctantly relent. Bryan’s worst fears are realized when Kim and her friend Amanda are suddenly abducted – in broad daylight – from the Paris apartment at which they’ve just arrived. Moments before Kim is dragged away by the as yet unseen and unknown assailants, she manages to phone Bryan, who begins to expertly piece together clues that will take him to the darkness of Paris’s underworld, and to the City of Light’s plushest mansions. He will face nightmares worse than anything he experienced in black ops – and let nothing and no one stop him from saving his daughter.
Save this product for later
Display prices in: USD